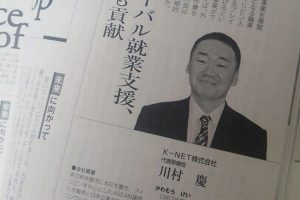 The K-Net Inc. was established in April 2012 as main business.

Started own company, the Astra Co., Ltd. in 1999 and was appointed as the Senior Managing Director. In 2002, established the Astra Philippines, Inc., whose main line of business are application development and the built-in system software development.
Later on became the company’s President from 2005.
A graduate of Keio University School of Commerce.